Domain means a territory or a region. From the networking point of view, domain is a territory of all the connected devices where devices data travel on that domain.

In networking, Domain refers to any group of devices, computers, printers, servers, etc. that are connected with each other and can share their resources on the network.

What is Collision domain?

Collision domain is a scenario when two devices frames collide with each other on the shared network. In this situation, two or more devices can not send data at the same time without causing a collision, only one device can send data at a particular time.

A shared media is a medium of data transfer where two or more users can transfer data at the same medium.

Ethernet hubs and BUS topology are used shared media where data signal travel on the same medium. Both work in half-duplex mode, so like in half-duplex, devices can send data at the same time but they will collide. 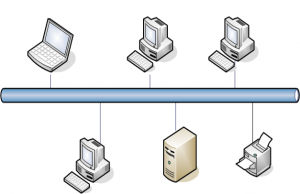 In this example of BUS topology, all the devices are connected with the LAN cable, which is shared with all the devices. In this network, if more than one device sends a message, then it will collide because it has a single collision domain.

As the same happens on the HUB network because all devices have the same collision domain.

What is Broadcast domain?

Broadcast domain means, when a device sends the message and the message travel to all the devices on the same group. Frame sent by one device is received by other devices on the network because now the domain (territory) of the frame is broadcast (also called broadcast frame).

A broadcast domain is a group of nodes where they can reach each other by a broadcast.