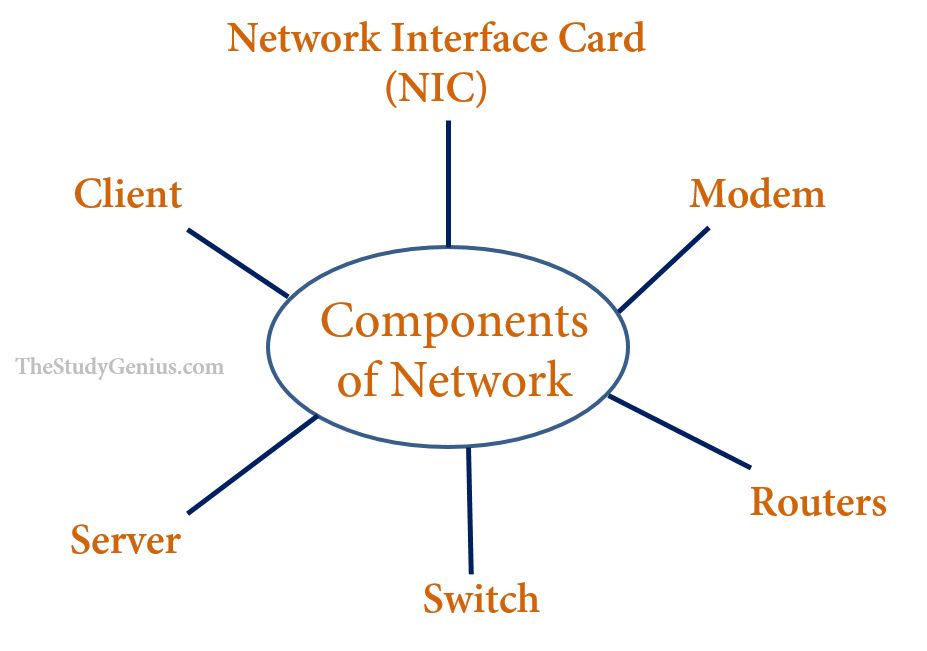 In this article, we will discuss the basic components of computer network, so let’s start.

A client is a program or a computer that runs on the local machine and requests from the server computer for services on a network. Client sent the request and receive data from the server.

A client can be a simple program or a whole computer that requests services from the server.

A Server is a powerful computer machine, which provides some services to its clients. When a computer shares its resources with client machines, they are called servers. Server shares our resources from their client’s users. They can handle many clients at a time. These are also called host computers. These are the powerful machines, wait for the request to arrive from clients and then respond to them.

There are many different types of servers:

A modem is a network hardware device that helps to convert signals from one computer network to another. It works as a signal translator because it translates one signal to another signal so the computers and telephone lines can interact with each other.

It is also known as a modulator-demodulator.

It’s used modulator and demodulator to modulate and demodulate the sine wave for encoding and decoding digital information for sending and receiving data.

Actually, there is two type’s of signal one is analog signals and digital signals.

Routers manage routing table that stores routes of various nodes in a computer network. Routing table is a list of routes stores in a router. When data needs to be sent from one node to another on the network, then the routing table is referred to in order to find the best possible route.

Switch is a network device that has multiple ports that are used to connect devices and create a network. It is called a Layer-2 device because it forward frames based on MAC addresses. It has storage capability, where a table is maintained. That’s table helps to identify every device connected to switch on the basis of MAC addresses.

NIC is a network component that is used to connect devices from the network. It works on the physical layer and the data-link layer and is responsible to exchange the computer’s data with a network. NIC collects the data from the computer and sends it to the transmission Channel.

For example: If I have a computer and I want to connect with other computers, I need a NIC card to connect the network.

Another Example, If I have a company where have 100’s of computers and I want to create a local network in my company then I need a NIC card on every computer or laptop so all computers can connect to each other.

Network Interface cards may be used for both wired and wireless connections.

Every NIC card contains a unique MAC address that can never change because their address is assigned at the factory where NIC manufactured.