In this article, we will discuss what is simple mail transfer protocol? Its features and components, MIME extension, and also discuss SMTP commands and response codes.

While sending the mail, SMTP is used two times-

You can be memorizing it by just remembering-

Actually, there are two protocols on the transport layer, TCP and UDP.

There are two primary components- SMTP Client and SMTP Server. 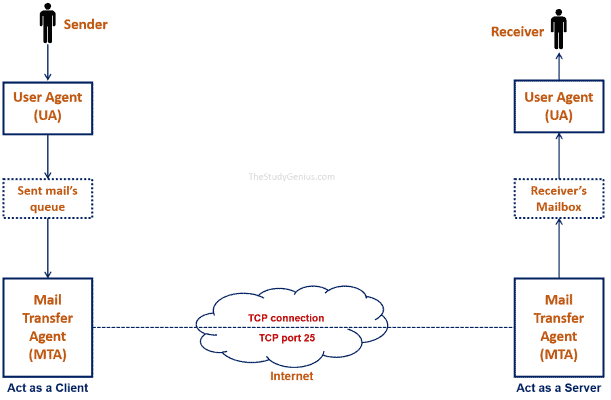 SMTP client acts as the agent for the users, called user agent (UA).  User agents (UA) are the application can be Gmail, yahoo mail, outlook, Netscape, etc. which provides a working environment for sending mail. Sender sends the message with the help of a user agent (UA). So when the user wants to send the mail, the user agent (UA) is responsible to create the message and puts it’s in the envelope.

SMTP servers are the servers, which manage the whole SMTP process. SMTP server is available on both sender’s and receiver’s sides to manage their users. They are the agents on both sides for transferring the messages also called Mail Transfer Agent (MTA).

When the user agent (UA) transfers the mail, the mail transfer agent (MTA) is responsible to transfer the messages to the receiver’s MTA, using TCP connections. MTA manages the whole process and maintains a small queue of mails because It also manages other user’s mails.

The MTA is responsible to deliver the email to the mailbox of the receiver, then the receiver can read the mails later by the user agents (UA).

MIME is an extension that extends the limited capability of email.

Actually, SMTP is a pure text-based protocol means it can only handle 7 bit ASCII text. It does not have any capability to transfer other types of data like images, videos, audios, etc. It cannot transfer executable files and binary objects and also cannot transfer the text data of other languages like- French, Japanese, and Chinese, etc.

So to solve these problems Multipurpose Internet Mail Extensions (MIME) introduced, which was specially designed for SMTP. MIME extension extends the capability of SMTP, which enables the users to transfer images, video files, audio files, executable files, etc. It also enables to transfer of messages in other languages like- French, Japanese, etc.

HELO/EHLO: It is the first SMTP command and the conversation start with this command, use to identify the domain like- gmail.com

MAIL FROM: It indicates the sender’s email address.

RCPT TO: It indicates the recipient’s email address. If there are multiple recipients, this command can be repeated multiple times.

SIZE: This command is used to tell the estimated size (in terms of bytes) of the attached email.

DATA: This command tells the SMTP receiver, next the stream of data will follow.

VRFY: This is a verify command, used to verify the email address.

QUIT: This command is used to terminate the connection.

220: The server is ready (response to the client’s attempt to establish a TCP connection).

221: The server closes the transmission channel.

250: The requested command is completed. As a rule, the code is followed by OK.

You can also Read:

What is Hub in Networking? and How it Works?

What is Switch in Networking?

What is Router? and How does it Works?

What is Modem in Computer Network? and How Modem works?